Day out at D’Kranji Farm Resort

Adventure Sunday! D’Pet Carnival, a pet carnival, was happening at D’Kranji Farm Resort this weekend. We thought it would be a great idea to check it out, so we drove up to Kranji with Polar in tow.

We’ve never been to Kranji, so it was a big eye opener for us. Apart from it being really ulu, it felt as if we weren’t in Singapore – reminiscent of the vineyards in Margaret River in Perth, but just a lot warmer. With a good mix of food for humans, local produce from the nearby farms, local dog supplies retailers, and animal shelters, the whole place was bustling when we arrived. Minister K.Shanmugam was even the guest-of-honour at the event. I understand from speaking to a stall owner that their stall rental is free but 10% of proceeds be channelled to dog related charities, which made it a real worthwhile cause! 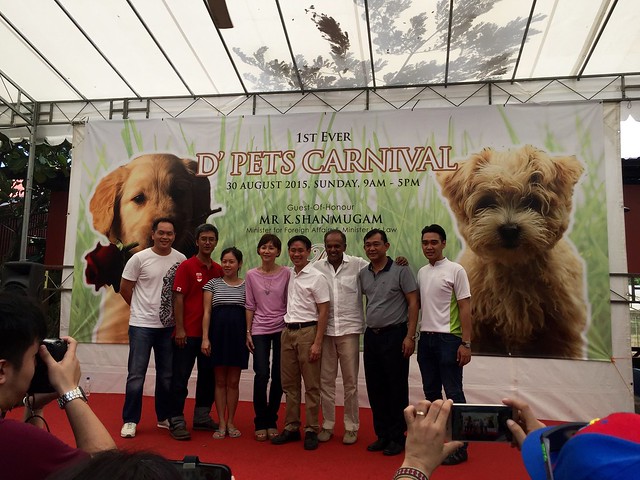 Upon arrival at about noon, our immediate goal was to take care of one of the most basic needs – lunch. With a large variety of food stalls to choose from, we decided to try food from Iskina Cebu (Lechón), Travelling Cow (Truffle Mac & Cheese), and Nomad the Gallant (Thai Ice Milk Tea). 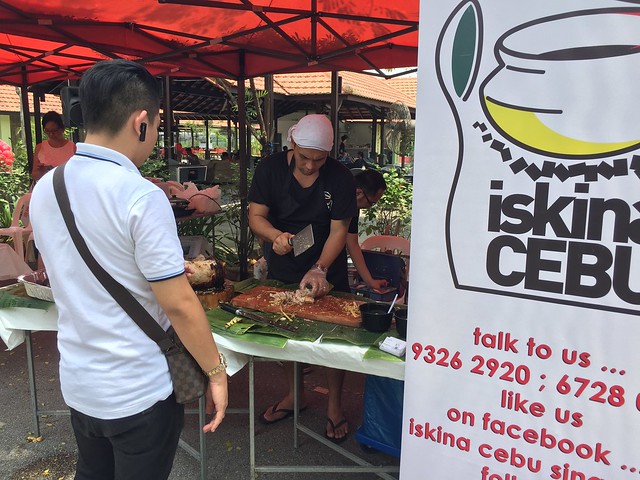 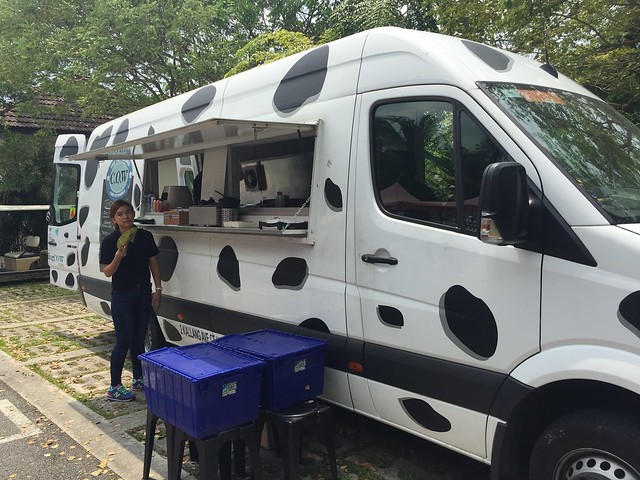 We’ve never had Lechón before so I did a little research once I was home. Lechón is a pork dish in several regions in the world, most specifically in Spain but is also very popular in the Philippines. Iskina Cebu, as the name says it, is from Cebu and the Lechón was so yummy!!! The flavour of the meat and the crispness of the skin was amazing. The only downside was that the meat was too fat. I guess some people like it that way. Truffle Mac & Cheese felt very pedestrian in comparison with the Lechón. Probably should have tried their Burger Duo instead but I didn’t have much stomach space left. 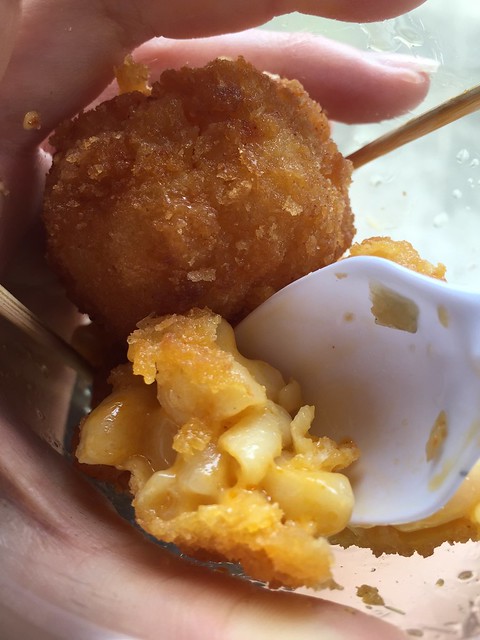 Thai Ice Milk Tea seems to be all the rage in Singapore at the moment. I gave it a try in the hot blistering weather and it was perfect. Strong and bitter taste, just the way I like my tea. It brought me back to the tea I had in Bangkok – very authentic, and perfect for the scorching weather. 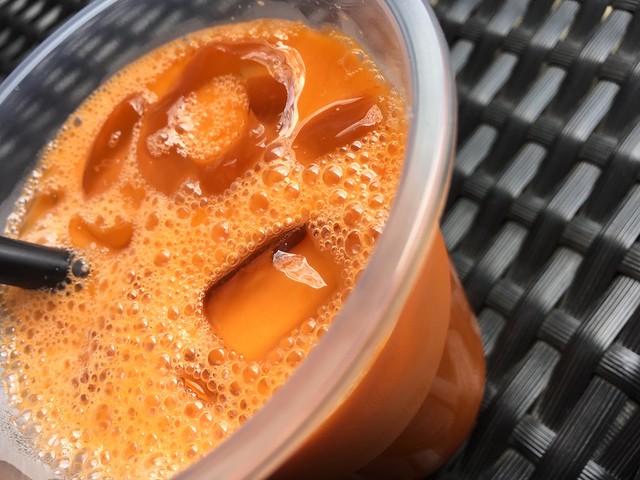 So that was the human portion of this post, let’s move on to the more important parts, the pet sections! There were dog shows ongoing held by Singapore Kennel Club. It seemed like a rather serious and sombre affair and the dogs were all prim and proper, groomed to their best. It was rather interesting to see the owners combing the dog’s fur with every ten steps taken. We didn’t watch the shows as we got very distracted by all the interesting stalls. 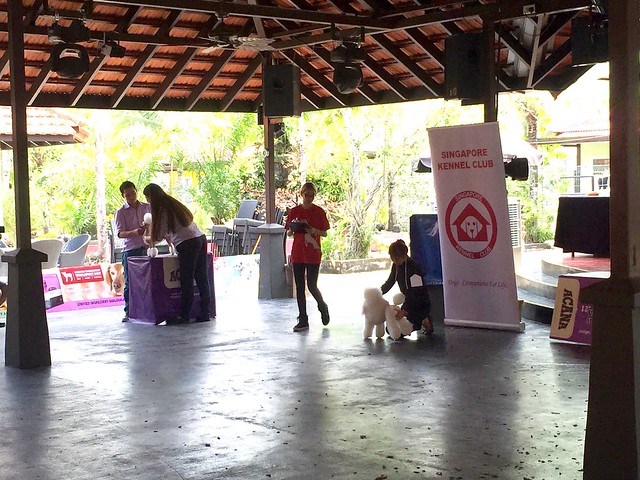 So before we begin on the stalls, here’s a picture of our loot for today. Polar is very happy (but I’m secretly crying). 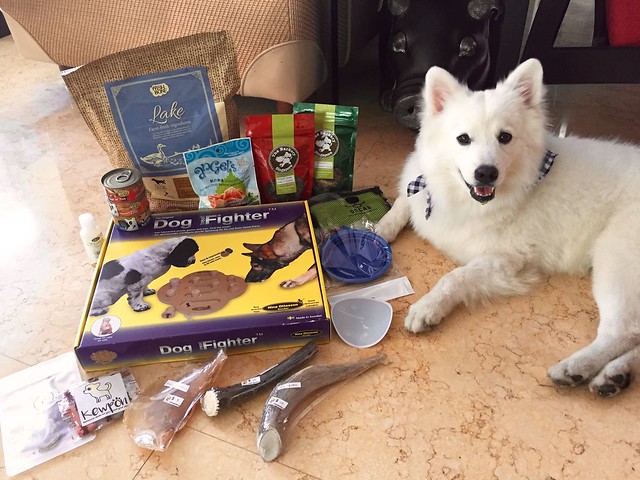 There were many stalls selling stuff for dogs so I’m only going to highlight a few based on our buys. From Soap-paradise, Jocelyn makes soaps for humans and dogs. Her soaps are all lovingly handcrafted for our human and canine needs – with no detergent and no preservatives, making it suitable for sensitive skin for both human and pet. Some of her soaps also use tick deterrent ingredients like Rose Geranium, Neem, Lavender. She was very friendly and helpful to share information on what type of ingredients had which benefits. She also had a Paw D Cure Salve made from natural ingredients like Avocado oil, Coconut oil and this salve works as a paw balm, which is very useful on hot days like this, and also as a healing balm for minor cuts or abrasions. We didn’t get any from them in the end because, I forgot, really. T_T 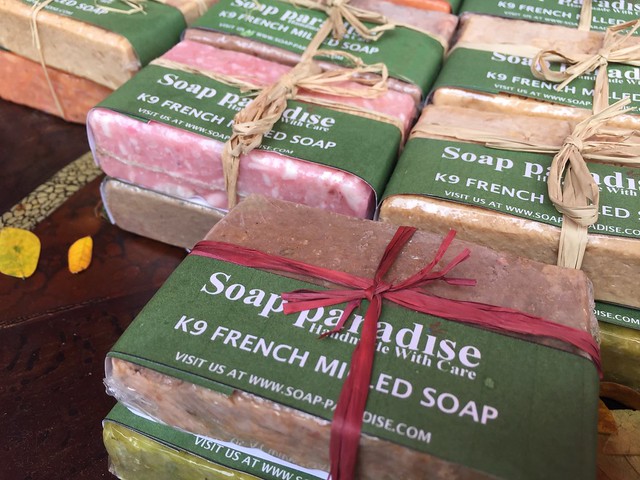 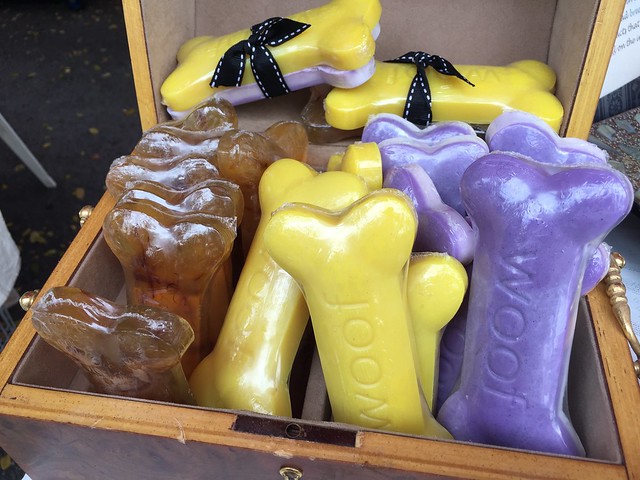 Soap for Dogs that acts as tick repellant 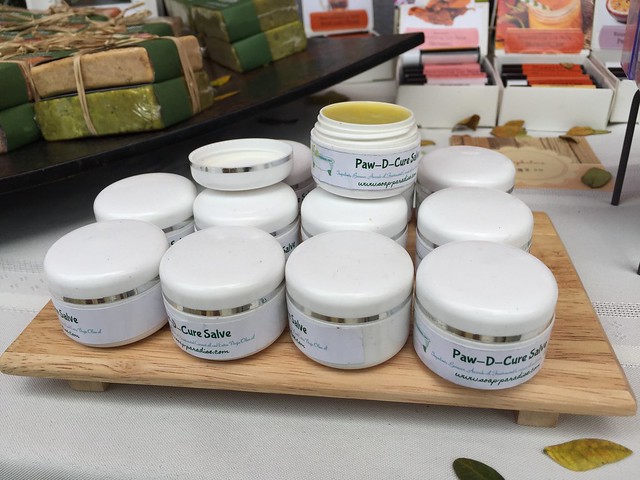 Right next door were the folks from Lollah where I very happily bought a hat with neko ears. Scored one for the human, me! The owner of the stall had a lot of fun trying to make Polar model for her. It took us awhile but we finally got that perfect shot. 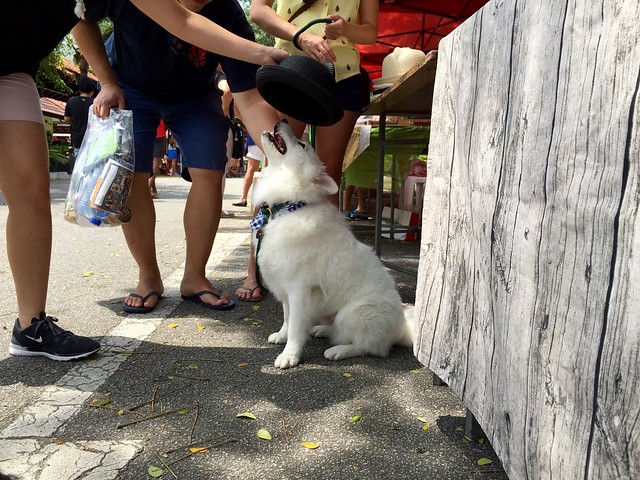 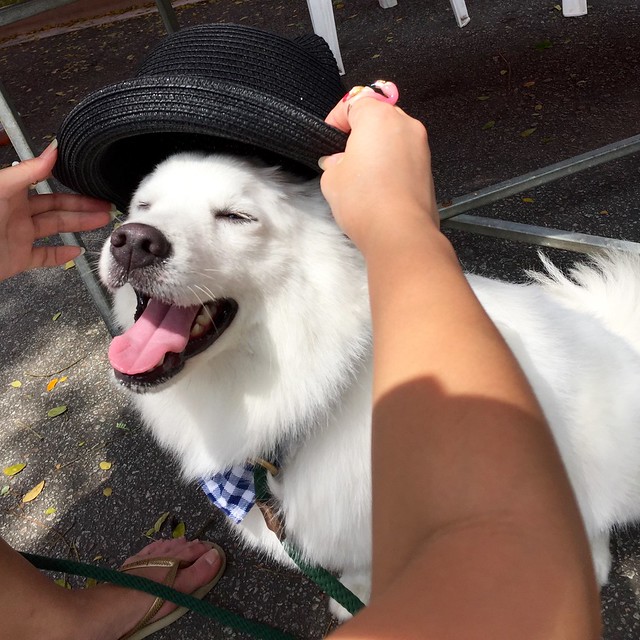 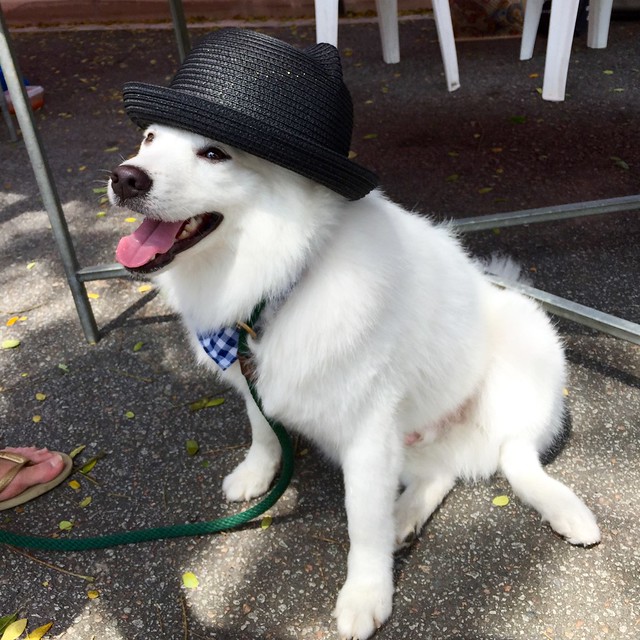 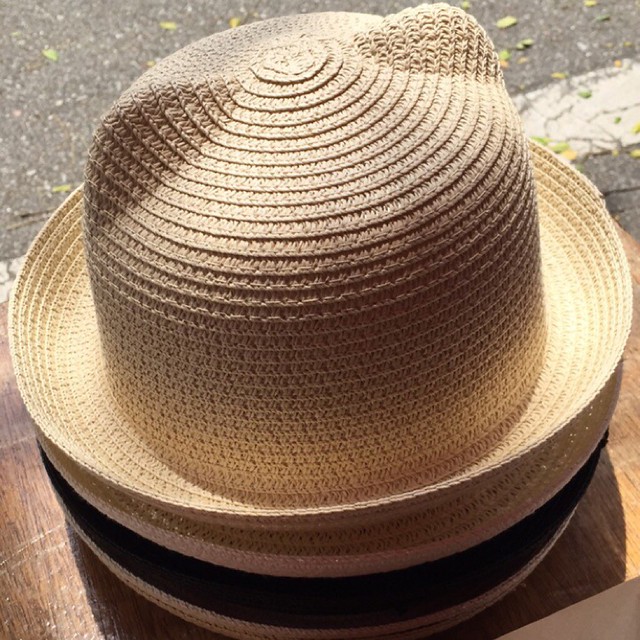 Animals Kitchen was one of the first dog retail stalls we came across – they sell dehydrated human grade dog treats that are pawsitively natural. What we found unique was they had dehydrated Shishamo (pregnant smelt fish) which we got for Polar to try at just $2! We also met the folks at Kewpon, which is new in the market. Supposedly to be a groupon for pet lovers (YAY!!!). They were at the carnival for to raise awareness and to get sign ups. For every sign up, you get a free dog treat sampler pack from Feed My Paws. We obviously were very eager to sign up because Polar loves free treats and I love great deals. =D 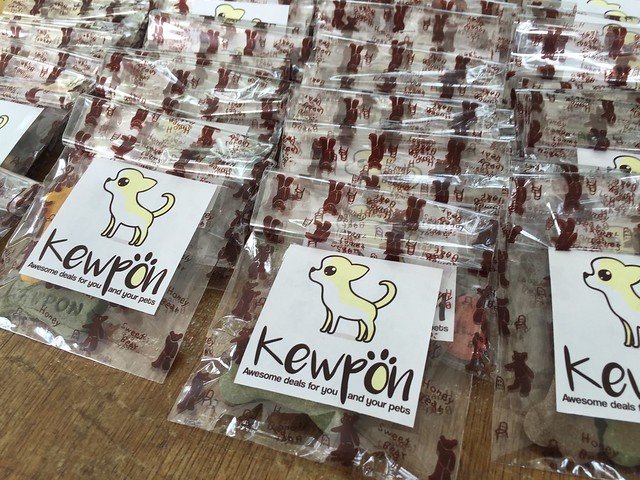 Our pretty friends at Nekojam were very kind to give us a free goodie bag that had dry and wet dog food. What was most interesting was they had a collaboration with The Sng Bao Society which is frozen flavoured iced pops, kinda like the old skool iced pops that I used to eat when I was young but in a hipster package. Polar and I enjoyed the Coconut and Watermelon ones together. All natural, with no added sugar! 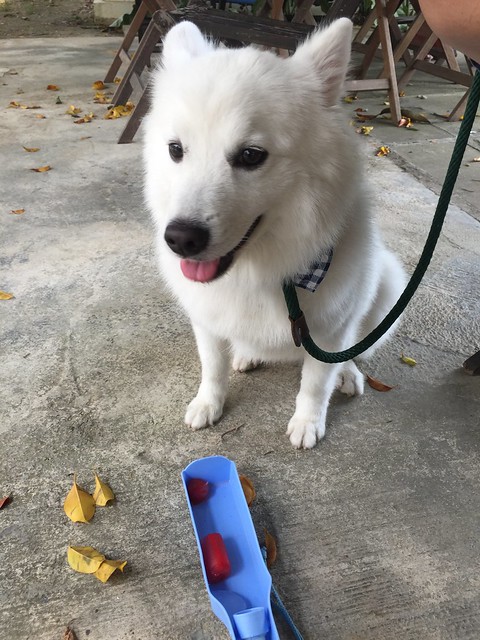 The folks at the local favourite The Barkery were very generous with their dehydrated treat samples as usual. Whenever we see them, I always end up buying a couple of bags of treats for Polar. Today we bought Probiotic Chicken Heart & Gizzard, and Probiotic Chicken Neck. They look really gross to us humans but Polar loves them. 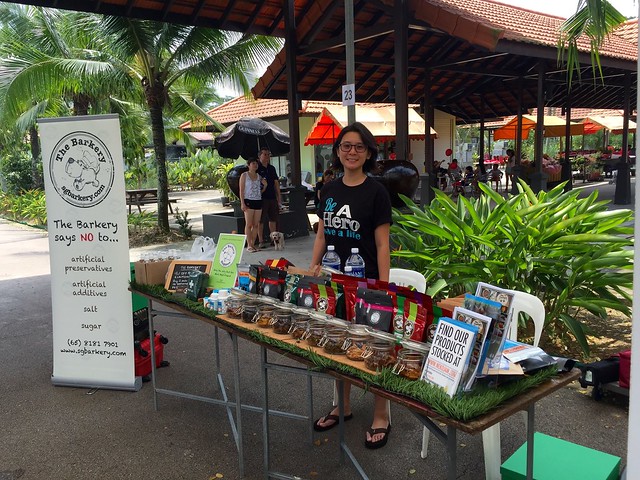 On the same row, you’ll find a very interestingly named shop called Ah Beng Pet Store. To be honest, when I saw the name I giggled, wondering why would anybody name their store that? The ladies that I met at the store were totally not ‘ah beng’ at all, and very friendly. We bought 2 Deer Antlers and 1 Bison Cartilage from them and got a free portable water bowl. The antlers were cheap! I’ve never seen Bison Cartilage before, and I found out that it’s full of chondroitin sulfate, glucosamine and collagen, which will keep Polar looking young!

Since this carnival is meant to be a charity event, we decided that we had to donate to one of the shelters. We decided to support Oasis Second Chance Animal Shelter – OSCAS by purchasing a micro-fibre towel for Polar’s messy shower times. They had a variety of other stuff but we felt the towel would be more practical.

My last and favourite purchase was at Pink Edge‘s booth. They are the distributor for Nina Ottoson toys and just for the event, they were going at 30% discount. I bought the Dog Fighter Puzzle which is of level 2 difficulty. It’s made in Sweden and of wood. Am absolutely thrilled to try it out with Polar. Looking forward to another lazy day!

We met a lot of dogs today, and also met Lycan & Lexie‘s humans. There were a lot of Singapore Specials looking for fur-ever homes! 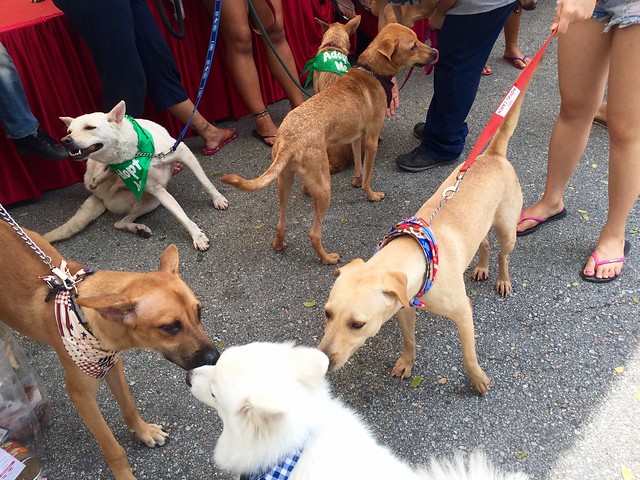 *Polar: Meet my new friend Hershey. We hit it off instantly and humans say it was hard to get a decent shot of both of us.* 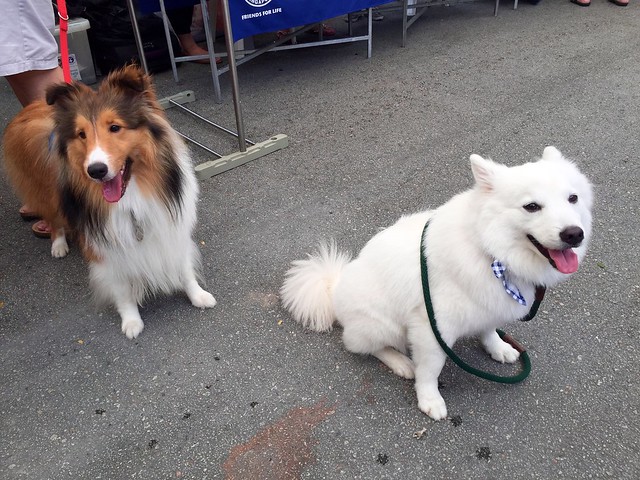 But of all the dogs and humans we met, a little Schnauzer mixed darling captivated my heart. Little Dinah is looking for a home. 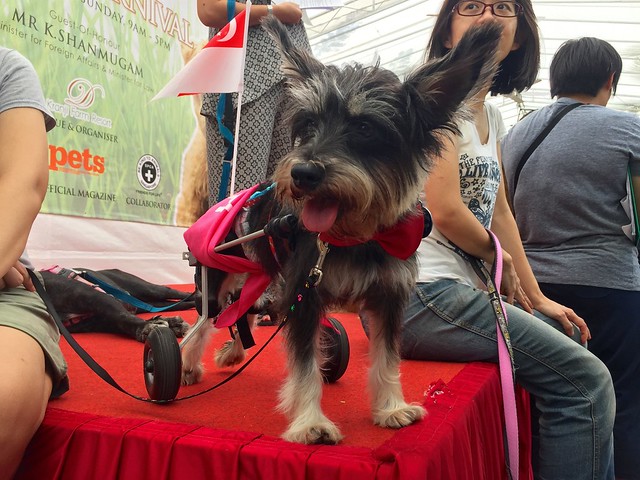 Seeing her and her wheels tugged heavily at my heartstrings. I wanted badly to bring her home but we already have two dogs. Since I am unable to give her a home, I would like to share a little about her here, hopefully someone will be able to give her a fur-ever home. She’s HDB approved, microchipped but paralysed on her hind legs. That doesn’t stop her from being active and she loves nothing more than resting on a human companion’s lap. She was so sweet and loves being showered with attention. If anyone is interested, please contact Three Legs Good at human@threelegsgood.org or SMS 8670 8857.

Well, that’s all I have for today and until next time, stay curious! 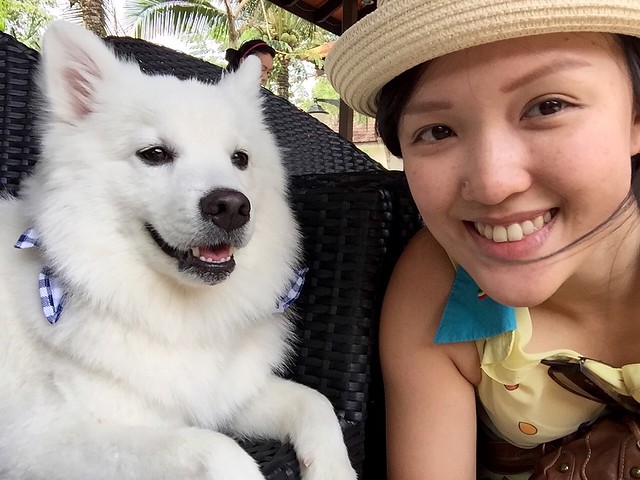